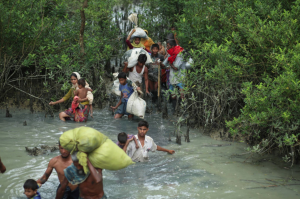 BBC needs to remove Jonathan Head from reporting about genocide in Burma & put him working the beat at Buckingham Palace. He just doesn’t get it. It isn’t that he’s mealy-mouthed but that he’s running interference for the junta. He describes genocide but then calls it communal violence; he accepts what the junta tells him about Rohingya terrorists setting off this onslaught when there is testimony to the contrary that the military prepared for this, including by arming, training, & inciting the nationalist death squads. He doesn’t interview any of the over 370,000 Rohingya who just fled for their lives. Is it possible that who the junta calls terrorists were actually Rohingya self-defense teams? Shouldn’t our man Head ask around & find out?

Now Head presents an apologetics for Suu Kyi–the same script presented in Counterpunch last week. It’s the script for all apologists now: she’s powerless; she’s just a politician & could lose her post; she would make the Buddhist nationalists mad–like Wirathu, the “monk” who said Rohingya are ‘animals who eat with their asses.” You wouldn’t want to rankle those guys. You wouldn’t want a military that burns people alive on your bad side.

Head speaks of Suu Kyi’s “immense moral authority.” Where has he been for the past three weeks? Or for that matter, for the past five years? Her authority went south a long time ago when she became not just the public face but a partner with the military in genocide. If she had an ounce of moral integrity she would long ago have denounced the military, even if she had to go into exile to do so.

Jonathan Head needs to be smartened up; he needs to listen to the voices of Rohingya refugees fleeing for their lives & stop listening to the generals. Otherwise his talents are much better used covering the decrepitudes of British feudalism.

You can read his regrettable apologia here in full: http://www.bbc.com/news/world-41243635

(Photo is Rohingya refugees from TRT)