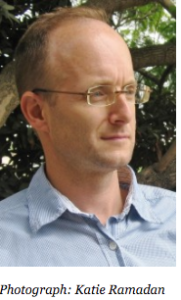 The journalist Jonathan Cook is exasperated–‘truly’ exasperated, as he explains in his blog entry “Harvey Weinstein & the politics of Hollywood.” Cook was a respected analyst of Palestinian & Israeli politics until he came out as an Assad supporter promoting the anti-Semitic scenario, shared by fascists, of a “Greater Israel” plan to Balkanize the Middle East. Once you cross into political territory staked out by fascists & anti-Semites, you are compromised & useless. Cook concedes the Assad regime is a dictatorship but to justify his support despite the gulag, torture, forcible disappearances, bombing of civilians, he points out that Syria has social security & high literacy levels. Well, if there is anything that justifies bombing civilians it is certainly the ability to read. Cook considers himself a civilized man but thinks human rights are way overrated. He said it’s “tempting” to use human rights in Syria as the measure of which side to support but the conflict isn’t about human rights. It’s about Balkanization by Israel & to defeat that plan gulags & bombing civilians are a regrettable necessity.

Our man’s disdain for human rights explains his exasperation today. What’s frying his ass about the assault & rape charges against Weinstein is not that so many women sustained violence but that the “story perfectly illustrates how politically disempowering identity politics can be.” Human rights don’t concern Cook but identity politics do. Forget that it’s a non sequitur to transition from charges of sexual assault to identity politics but Cook has an axe to grind because he disdains the struggle for human rights, especially by the oppressed like women, Blacks, Latinos, LGBT. The more Cook talks, the more he shovels horse manure against the tide in a masterpiece of mansplaining. How have generations of feminists across this globe survived without this upper class twit telling us where we’ve gone wrong. He doesn’t appear to have ten minutes of political organizing in his resume but thinks women (not feminists, since he doesn’t believe in identity politics) should form trade unions. A guy who doesn’t know his ass from his elbow about political organizing could be forgiven for confusions about social movements but it would be enough if he just kept his mouth shut about things beyond his comprehension.

If there’s one thing feminism has excoriated brilliantly & without mercy, it is the divide & conquer tactic that tries to keep women pitted against each other, seeing each other as competitors. Feminism works tirelessly to break that crap down. Most of us have had it up to our eyeballs. So when Cook brings up Reese Witherspoon, Angelina Jolie, Jennifer Lawrence & Gwyneth Paltrow, we understand we’re supposed to cop an attitude toward them because they’re rich, famous, & don’t move in our social circles. To us, brother Cook, they are sisters & nothing you blither against identity politics means we will waver in our support for them against sexual assault & rape. What we will do is take their testimony & move forward to organizing a movement–of identity politics, no less–to expose & end sexual crimes against women in the workplace, in war & occupation zones, in genocide. If you don’t like it, brother Cook, you can stuff it in the same place you stuff your anti-Semitism & Islamophobia.

(Photo is Cook who supports dictatorship because human rights are overrated)