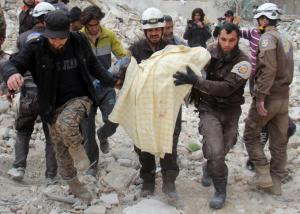 Wasn’t it always just a matter of time before bombs spoke louder than Assadist lies about what is going on in Syria? The US airstrikes on a mosque in a “rebel-held area” of Syria where Russian & Syrian bombers prowl poses a whopping propaganda problem for the US, for Syria & for Assad’s coterie of propagandists.

All along, Assadists have claimed the US is engaged in a regime-change operation primarily through bankrolling & training al-Qaeda terrorists. But when the US bombed the mosque, it claimed it was attempting to bomb a nearby building where al-Qaeda fighters were meeting. Of course the Pentagon lies through its teeth. It intended to bomb civilians. But whether it was bombing the mosque or an al-Qaeda meeting, it has some explaining to do. And so do Assadists. Why would the US be bombing a mosque or even al-Qaeda if it was attempting to take out Assad forces? According to the Assadist scenario, in bombing al-Qaeda, the US would be bombing its own fighters when it should be targeting the Syrian army.

But the imaginary regime-change scenario falls apart because the White Helmets, who Assadists denounce ad nauseam as a US propaganda group, were first responders at the mosque recovering victims from the rubble. According to Assad’s Syrian Girl, the White Helmets condemned the bombing. Bellingcat, which is a target of Assadist wrath for monitoring Syrian & Russian targeting of civilians, confirmed the mosque was bombed by the US. To make matters worse, the Syrian Observatory for Human Rights, another Assadist bête noire denounced for reporting the casualties of Syrian & Russian bombing, is reporting the number of civilian deaths from the US bombing of the mosque.

My oh my, this is gonna be a tough one for the Beavis & Butthead propagandists & the Hands Off Syria Coalition to get around. But RT led the way in laying down the party line for Assad’s squads to memorize, in the customary style of Stalinist pedagogy. RT dragged out retired US AF Lieutenant Colonel Karen Kwiatkowski to get ahead of the story. Kwiatkowski is a member of Veteran Intelligence Professionals for Sanity, the group of retired CIA & FBI agents & retired military officials & diplomats now presuming to lead & instead destroying the US antiwar movement. They are all right-wing libertarians & supporters of the Assad regime, Putin, & Trump, including Coleen Rowley, Ray McGovern, Ann Wright. How they became leading figures in the US antiwar movement would help explain why antiwar activity in the US is Lilliputian, where it exists.

Colonel Karen speaks with marbles in her mouth when it comes to vilifying the White Helmets, Bellingcat, & the Syrian Observatory for Human Rights. The task was over her head. It requires the smarmy talents of Bartlett & Beeley which Max Blumenthal & Ben Norton can then plagiarize. (Rania Khalek’s narcissism & cognition disorders make her ill-suited to the task; if it isn’t about her, she’s not interested.) We await what Bartlett & Beeley will come up with but expect it to be on an intellectual par with their usual post-truth truthiness & “alternative facts” in the style of Kellyanne Conway.

What’s interesting about the RT interview with Colonel Karen is this mangled statement (which must make the Pentagon grateful she’s no longer in the Air Force, though perhaps she was better with bombing than with cognition) :

“This [is] publicity game. They have their war; they have their targeting; they’re doing what they are doing as far as American foreign policy. This is not clear, what the American foreign policy is, but Trump has certainly unleashed the military to “proceed with it,” whatever it is. So, the media is just one more tool. If they can find somebody to verify what they want to put out, then the White Helmets report would be fine, otherwise they’re not credible. I think, really, it’s almost otherworldly, the way that reporting on the war and the battles and the fighting and the bombing has been.”

Such gibberish is right up RT’s alley. The US has been deliberately evasive about its strategy in Syria, but do they think it serves Russia’s interests for Colonel Karen to say it’s not clear what US foreign policy in Syria is? Doesn’t that undercut the certainty of Assadists that the US is attempting regime-change in Syria? We await to see how the US bombing of the mosque will play out in propaganda to address these contradictions.

But those who understand there is a revolution by working people against Assad’s dictatorship & a counter-revolution including Syria, Russia, the US, Iran, et al are not surprised that bombs are speaking louder than lies.

The photo is White Helmets at the site of the mosque rescuing those buried in the rubble.