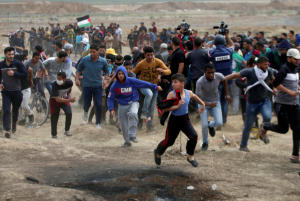 There’s something about this photo of unarmed Palestinian protesters running from Israeli snipers which is absolutely infuriating but it also exposes the reality of who are the real terrorists in the conflict between Palestinians & the state of Israel. Palestinians are waging a peaceful, well-organized campaign, including children, demanding the right of return for millions of refugees still living in refugee camps. Palestine is their homeland. Most of them living in Syria have been displaced by the counterrevolution which continues today at the Yarmouk refugee camp south of Damascus, now being pummeled by Syrian bombers. Jordan long ago closed its borders to Palestinian refugees from Syria so there aren’t many places for them to seek asylum. Meanwhile, Israel continues to recruit Zionists from around the world who have no connection to Palestine to become part of the settlement program & take Palestinian lands. They have no more claim to Palestine than Irish-Americans have to the Rhineland from whence their ancestors came 3,000 years ago. The right of return is a fundamental issue to Palestinians & must be supported.

Palestinians can only win against the ruthless behemoth of Israel backed by the US & Europe with consistent mobilized international solidarity actions. During this Great Return March campaign in Gaza, we should be holding rallies to support their demands & stand with them against Israeli violence.