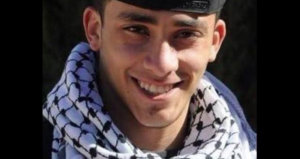 Israeli border policeman Ben Dery shot & killed 17-year-old Palestinian Nadim Nuwara on Naqba Day, May 15, 2014 at a checkpoint near the West Bank city of Ramallah in an incident caught on video. Nadim was protesting the ongoing colonization of Palestine. Dery used live ammunition to kill Nadim in cold blood even though he was unarmed & presented no danger. On the same day, at the same place, & in the same circumstances, a 16-year-old Palestinian named Muhammed Abu al-Thahir was fatally shot in the back & his killing also was caught on video. No one was ever charged for the killing of Mohammed & in March 2016 Israel closed the investigation claiming there was no evidence. A third teenager named Muhammad al-Azzeh was shot with live ammo on the same day but survived. It is exceptionally rare for Israeli soldiers to be prosecuted for killing or assaulting a Palestinian so it comes as no surprise that Dery was just sentenced to 9 months in prison for “causing death through negligence & causing severe bodily harm.” It is the same impunity for human rights crimes that the Indian occupying army is provided in Kashmir.

May all these young freedom fighters prevail over Israeli apartheid & genocide.

Photo is Nadim Nuwara. May he Rest In Peace.