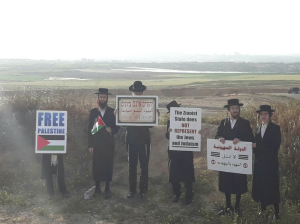 There have been protest rallies in solidarity with the Great Return March in Turkey, Jordan, Israel, London, & Jakarta. In Israel, when tough-minded pro-Palestinian activist Adi Shosberger made a video calling Israeli snipers “terrorists” participating in the “massacre of innocent civilians,” she was trashed by two Israeli radio hosts. One called her “filth,” “stupid,” “retarded,” a “little bitch” & suggested she be sent to Gaza to be raped & murdered. She has since been harassed, her children intimidated, her tires slashed, garbage dumped on her lawn, been subject to death threats & condemned by Netanyahu in a cabinet meeting. Israeli police have not taken the threats against Shosberger seriously. Israeli Defense Minister Avigdor Lieberman (born in the former Soviet Union) called for new legislation that would imprison those who “harm the security of the state.”

The photo is Jewish anti-Zionist activists from the Neturei Karta community in Israel near the apartheid barrier with Gaza protesting the Israeli attacks on unarmed civilians. The Neturei Karta community are descendants of Hungarian & Lithuanian Jews who settled in Jerusalem in the 19th century. They are outspokenly opposed to Zionism, the state of Israel, & support BDS & Palestinian rights.

Great respect to Israeli activists who stand their ground in such a repressive political atmosphere. In alliance with Palestinians, they are the hope & the vanguard of a democratic, secular state where Palestinians & Jews will live as brothers & sisters.