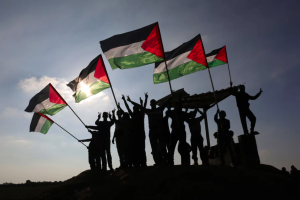 Thousands marched in Gaza against the Israeli bill allowing military courts to impose the death penalty on “terrorists” by which of course the Knesset means only Palestinians, including little kids who throw stones at the occupying army. Or Ahed Tamimi who is still in jail for righteously slapping an Israeli soldier. This death penalty bill takes Israeli apartheid & ethnic cleansing to new levels of degradation & violence & must be opposed.

Video of protests in Gaza: https://www.youtube.com/watch?v=fLCRejpnXn0

These protesters in photo are at Khan Yunis, Gaza.