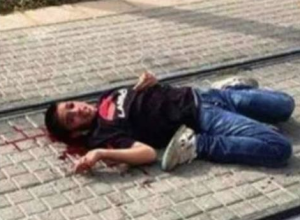 Remember this boy named Ahmad Manasrah from October 2015? He was 13-years-old then & had been shot several times by an Israeli settler. As he writhed in pain on the ground, he was taunted as the “son of a whore” & soldiers were egged on to shoot him to death.

This was during the Israeli hysteria about a “stabbing Intifada” to cover a pogrom of violence against Palestinian youth & as a pretext to execute them.

Yesterday, an Israeli court sentenced him to 12 years in prison for a stabbing attempt. There’s going to have to be an international campaign in his defense.