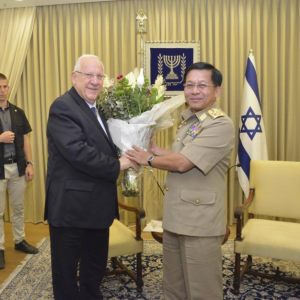 This is Israeli president Reuven Rivlin accepting a bouquet from Burmese Genocidaire-in-Chief General Min Aung Hlaing in appreciation for Israel selling arms to Burma to conduct genocide against the Rohingya people. This was at a meeting in Jerusalem on September 10th, 2017.

Haaretz put its criticism so cogently after pointing out that in the 1990s Israel also sold weapons to the genocidal governments of Rwanda & Serbia: “To send weapons to a government that’s guilty of genocide is very similar to (excuse the comparison) sending weapons to Nazi Germany during the Holocaust. Our leaders nevertheless did this knowingly & desecrated the memory of the Holocaust in the process. It’s important to stress that they turned both you & me into criminals, into accessories to a crime & to abettors of genocide.”
Regrettably, Haaretz did not point out that Israel was founded & survives on the ethnic cleansing of the indigenous Palestinian people.

Honoring BDS, the economic & cultural boycott of Israel, is a powerful way to stand in solidarity with Palestinians against ethnic cleansing & with the Rohingya people against genocide. Buy nothing with a barcode beginning 729 & check every label. The fate of the oppressed in inextricably linked.