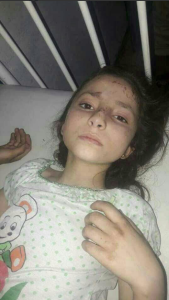 This little girl named Ruqiya came alone on a convoy of refugees fleeing Yarmouk refugee camp to Qalaat Mudiq where she is now in hospital. Meanwhile, Assad’s supporters in Damascus are dancing in the streets that Syrian & Russian bombers & Iranian artillery have cleared Yarmouk of terrorists. Is this little girl the price of a dictator’s national sovereignty?