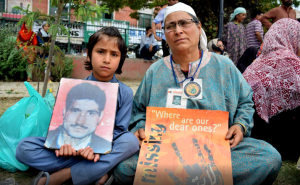 Eight-year-old Irtiza & her grandmother at the sit-in protest on the International Day of the Disappeared in Srinagar. Their uncle & son (in the photo Irtiza is holding) was abducted by the Indian army from the street outside his home on June 6th, 1990. Ever since, his mom has been making the rounds of police stations begging for information about her son.

Losing a beloved through disappearance has a powerful emotional dynamic & is a grief so wrenching it can never be resolved but only endured. That’s what makes these memorial protests so important. Forcible disappearances must be highlighted & opposed as a practice intended to threaten & demoralize those who resist occupation, war, genocide.

This is a very moving article about those who attended the protest on Wednesday: