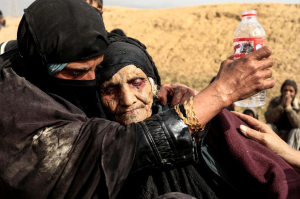 Emancipation US-style: it was almost 21 years ago, in May 1996, when Madeleine Albright despicably said the deaths of 500,000 Iraqi children resulting from US intervention was a price well paid for achieving US policy goals in Iraq. “We think the price is worth it,” she said.

By “we” of course she didn’t mean the Iraqi families who had watched their beloved children suffer & die. She meant presidents Bush, Sr. & Clinton who initiated & extended the first Gulf War against Iraq starting in 1990, & the generals in the Pentagon who so ruthlessly executed it including with the use of depleted uranium.

Twenty-one years on, these women testify to the achievement of US policy goals: after 21 years of war & occupation now battling ISIS paramilitary forces for control of Mosul by bombing the place to smithereens & forcibly displacing tens of thousands of fleeing civilians.

Maybe it’s time to ask Iraqis if they think the price was “worth it.” Maybe it’s long since time to prosecute all those US officials involved in the barbaric occupation & bombing of Iraq. It is way past time to rebuild the international antiwar movement demanding the US get the hell of of Iraq.

March 20th marks 14 years since the invasion of Iraq & the overthrow of former US ally Saddam Hussein under the presidency of Bush, Jr. If there are no protests or pickets to mark that day in your town, call one or find some way to demand the US immediately & unconditionally withdraw from Iraq.

US out of Iraq & Syria now!