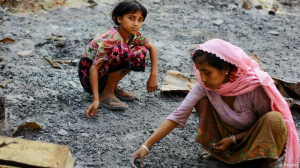 The International Crisis Group (ICG) just released a 25-page report titled “Myanmar: A New Muslim Insurgency in Rakhine State.” Many will want a “nuanced” analysis of the report. That kind won’t be forthcoming on this wall; this will be as much of a hatchet-job as can be mustered because the report is contemptible & dishonest in every possible way.

It denies genocide by the military junta against Rohingya Muslims, soft-pedals the scale of military violence in Arakan since October 9th, & endangers Rohingya refugees by claiming those in Saudi Arabia, Pakistan, Bangladesh, & possibly India are organizing fatwas & are behind the rise of “jihadist” terrorist groups in Arakan state.

Perhaps we should begin the hatchet-job by describing the political character of the ICG. It’s a thoroughly conservative establishment operation formed in 1995 which claims to do field research on violent conflict & conflict resolution. Nothing resolves a genocide so easily or so fast as denying it even exists.

The ICG claims to do field research in Africa, Asia & Central Asia, the Middle East, & Latin America but their staff of analysts is almost completely white people from Europe. Nothing wrong with being white; by the time they’re out of early childhood most white people adjust admirably to growing up pasty. But if you claim to speak authoritatively about the complex problems of complex societies you ought to consider hiring analysts from those regions.

The two ICG staff who did the report on the Rohingya are Tim Johnston, a white guy who claims he reported from the region but whose body of work from Myanmar isn’t available on search engines; & an Indian woman who appears to have no credentials of any kind at all.

The report is actually worth a read even though one can only trust the periods & commas. The method will be quite familiar to those who read Assadist propaganda & draws from the same cesspool for inspiration: anti-Muslim hysteria & hatred & all that “jihadist” rubbish.

The ICG report presents a crisis to Rohingya solidarity & the only possible response for human rights activists is to increase reports about what is actually going on in Arakan state; to demand refugee rights, including no police surveillance of refugee political groups; & to collaborate with refugee activists in building public forums, rallies, protests in defense of Rohinga–whether in Arakan state or any other country.

This is the full ICG report. When you’ve finished reading it, use it for toilet paper:
https://d2071andvip0wj.cloudfront.net/283-myanmar-a-new-muslim-insurgency-in-rakhine-state.pdf