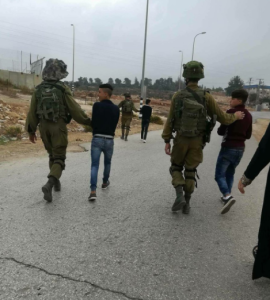 Israeli occupying forces arrested three young boys from the West Bank town of Nabi Saleh near Ramallah while they were on their way to school. The boys who are cousins are Ahmad Shaker al-Tamimi, Muhannad Essam al-Tamimi, & Muhannad Hamza al-Tamimi. There’s no indication the boys were engaged in anything other than walking while Palestinian in occupied Palestine.

It is reported that 700 Palestinian children are arrested & prosecuted in Israeli military courts every year. Not just because Palestinian children & youth are part of resistance to apartheid & ethnic cleansing, but because Israel is determined to crush the spirit of rebellion by demoralizing or destroying youth.

Stand with Palestinian children by honoring & promoting the economic & cultural boycott of Israel. Buy nothing with barcode beginning 729.

Photo is the three boys being kidnapped by Israeli troops.