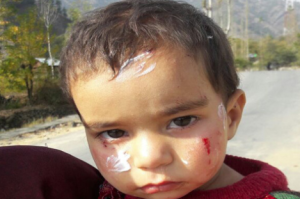 Even though we know children are directly targeted by Israeli bombers in Gaza, Indian soldiers using pellet guns in Kashmir, & Burmese soldiers who execute or orphan Rohingya children, we are never inured to the horrors of crimes against children in war, occupation, & genocide.

This photo is one-year-old Anouba Gulzar whose family lives in the Pulwama district of Kashmir. This morning, army vehicles passing through their village found the road blocked & in retaliation began ransacking homes, breaking windows, smashing up the town. When soldiers arrested little Anouba’s father Gulzar Ahmed Dar–probably for objecting to the rampage–several family members including his wife, elderly parents, & other residents, including children rushed to his rescue. The soldiers turned on them, severely beating dozens with their fists & guns, including Anouba & an eleven-year-old boy who was admitted to hospital for injuries. Doctors treating them said one of the two infants they treated had “serious abdomen trauma injury.” Thirteen unarmed civilians were injured, some seriously, & seven people were arrested.

Following this barbaric incident, hundreds of area residents gathered on the highway to protest & chant anti-India slogans. Child welfare is central to war, occupation, & genocide because children are specifically targeted. The harm done them is not accidental or in the Pentagon’s repugnant terms “collateral damage.” Injuring, disabling, disfiguring, traumatizing children is a strategy to demoralize & minimize resistance.

Stand with children. Stand with Kashmiris. End the occupation. Self-determination for Kashmir.

(Photo of Anouba from Greater Kashmir)