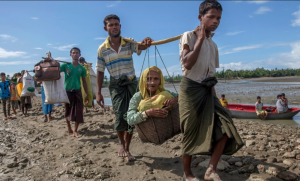 BDNews24, one of Bangladesh’s leading media sources, reports today that India has increased patrols on its eastern border with Bangladesh to stop Rohingya refugees from crossing into India. One official with the Border Security Force (BSF) said “We won’t tolerate Rohingya on Indian soil.” Dovetailing with India’s attempts to deport 40,000 Rohingya refugees by portraying them as terrorists, an Indian official said border guards have been authorized to use “rude & crude” methods to stop “infiltration” by Rohingya refugees.

By “rude & crude” methods, the BSF means the chilli & stun grenades it is using against thousands of traumatized refugees who have traveled for days in flight for their lives, haven’t eaten for days, with many sustaining bullet wounds, knife & machete cuts, burn injuries. Some are elderly, some are small children.

Chilli grenades are called non-lethal weapons by the Indian army which also designates pellet guns as non-lethal & were approved for use in Kashmir in September 2016. They weaponize one of the most powerful chili peppers in the world to become a skin & eye irritant that overcomes protesters & bystanders. There is nothing non-lethal about them any more than “collateral damage” is an incidental result of carpet bombing civilians.

The Indian government is monstrous for this crime against refugees but who will rebuke them since all countries allowed thousands of Rohingya refugees to drown in the Andaman Sea in May 2015? Which government has the moral authority to protest when the EU allows tens of thousands of refugees from Africa & the Middle East to drown in the Mediterranean & EU officials have used all sorts of weapons to drive back war refugees from Afghanistan, Syria, & other countries?

The only political force that can defend refugee rights is men, women, & children of good will around this world standing up & demanding asylum for refugees from war & genocide.

(Photo of Rohingya refugees from CNN)