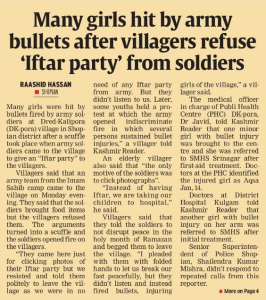 This account is the clearest report of the outrageous incident last evening in the Shopian district of Kashmir when Indian occupying soldiers opened fire on unarmed Kashmiris who rejected the intrusion of soldiers into their evening meal breaking the Ramadan fast. Four young girls were injured, two with bullet wounds. You can see, especially in light of the massacre in Gaza, the irrational, sociopathic mentality of military occupation.

Here is another longer article on the incident which can only be called a senseless act of violence during the Indian Army’s claim of a ceasefire: