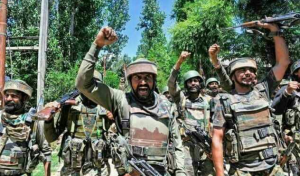 Indian soldiers in Kashmir celebrating the death of Kashmiri civilians.

Just like US, Israeli, Russian, Syrian soldiers, these young men are dehumanized by the barbarities they engage in. That is the nature of militarism. There is no emancipatory character or potential in armies of occupation.

The suicide rate of Indian soldiers in Kashmir is as high as that of active duty US soldiers. India does not report the number of suicides among its veterans nor the levels of PTSD, mental illness, criminal violence but they are surely as sky high as that of US veterans. Militarism is a criminal enterprise which devours the soul of a nation if it is not actively opposed.

Go back India. Go back.