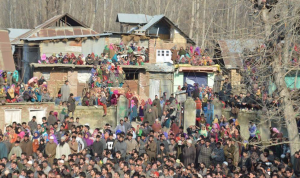 Thousands of Kashmiris attended funerals today for six young men shot to death by paramilitary soldiers in a search & cordon operation in the Kulgam Frisal area that began around 4:30 am this morning. Four of those killed were alleged militants; two were civilians. Military & police officials called the killing of the four alleged militants a “major success” & “major breakthrough” in the fight against “Islamic militants” & called the civilian deaths “unfortunate.”

In fact, from the point of view of human rights, the operation was a cold-blooded massacre just like all military encounters with militants. From the military point of view, it was a public relations catastrophe: first, because they can’t get their story straight about what happened; & second, because the military did a shoot to kill operation against alleged militants & then shot live ammunition at unarmed residents protesting the assault. One can understand the confusions of young people attracted to armed struggle when due process is no part of military occupation & when you get shot at no matter what you do to resist occupation.

According to Asian Age, an Indian media source, officials in Kashmir told them three different counterinsurgency forces were involved in the operation. The Special Operations Group (SOG) said they got a tipoff from their network of snitches about the presence of militants in the district. Acting on that tip, they set up a cordon around the village & began waking people up in the middle of the night for a house-to-house search. When they couldn’t find any militants, who presumably look like everybody else in town, the SOG guys insisted that their snitch could not be wrong which prompted soldiers to re-search a particular house.

On re-searching, the soldiers found a false ceiling in the house where the militants were hiding. When their hideout was discovered, the militants opened fire on the soldiers & the home owner & his son who were with the soldiers, killing the son instantly. That scenario strains credulity & requires investigation.

In a second version of events reported by police officials to Kashmir media, counterinsurgency troops, acting on that tipoff, cordoned off a “suspected house” & began the search operation. No mention of waking up everybody in town & searching their homes first. In this scenario, three militants managed to escape the cordon–quite a feat since in this version there was one around the house & another around the village. In this version, the hiding militants opened fire on the paramilitary search party & the home owner’s son was killed in crossfire. Possible the soldiers were using him as a human shield? Again, all this requires investigation.

The four militants shooting from the attic were all killed, all were identified as local youth, & their bodies were turned over to their families for burial today. The body of Ashiq Reshi, the 30-year-old son of the home owner, was recovered from the debris of the house which had been completely razed to the ground. Exactly what kind of operation was it that required leveling the house? Or that couldn’t remove the body of a victim before it did so?

The violence of this operation brought thousands of unarmed residents from the surrounding areas fearlessly marching toward the site, shouting freedom slogans, & attempting to break the cordon around the village. The soldiers opened fire on them with pellet guns, tear gas, & live ammunition. Another young man was shot dead & 15 others sustained bullet injuries. Six are in surgery; one remains in critical condition.

The young men killed include the four alleged militants: Mudassir Ahmed Tantrey, Wakeel Ahmed Thokar, Farooq Ahmed Bhat & Muhammad Yunis Lone; & the home owner’s son, Ashiq Reshi. Three different names have been given for the civilian protester so it isn’t certain if there’s confusion about the name or whether three were shot. The names are: Mushtaq Ahmed, Muhammad Shafi Reshi, Mushtaq Ibrahim Itoo. May they Rest In Peace as we honor them as freedom fighters.

Their funerals were attended by tens of thousands of people & reportedly massive protests continue in the district against such atrocities of military occupation. The joint resistance leadership has called for a complete shutdown in protest tomorrow.

Our fullest solidarity with the Kashmiri struggle to end the occupation & achieve self-determination for Kashmir.

Photo is of one of the several funerals today, all attended by thousands of people shouting “Azadi.”