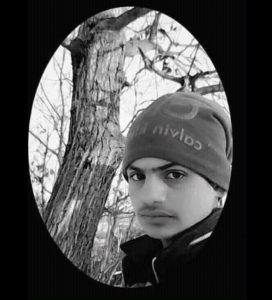 Indian media is at a fever pitch denouncing the ‘miscreants’ who stoned a school bus in the Shopian district of Kashmir & seriously injured two students. Going over the top with melodramatic music blasting in the background, one hyperventilating Indian TV reporter called it a “crime against humanity.” Omar Abdullah, the criminal thug who as Indian Chief Minister of the state authorized the use of pellet guns against unarmed protesters, called the stone pelters ‘goons.’ Let’s take their nationalist fulminations down a notch. They haven’t yet identified who the ‘miscreants’ were–whether they were criminal hooligans, teenagers in a prank gone very wrong, or possibly incited by agents provocateurs. It is deeply regrettable that two kids were injured & nothing at all to be made light of. But if we’re going to talk crimes against humanity, what about the hunt to kill operation the Indian army conducted today in the Shopian district where they shot & killed a 12-year-old boy? Now that is a crime against humanity & a constant feature of the occupation of Kashmir. But where’s the melodrama & denunciations on Indian news? The stone pelters gathered at the hunt to kill operation to obstruct more crimes against humanity were highly unlikely to be the same kind of kids as those who attacked the school bus. Those who throw rocks at school buses are an antisocial element or are just dumb kids; stone pelters at hunt to kill operations function as civilian defense guards. As Kaiser Majeed said: “The Shopian school bus incident is reprehensible. But do child-killers have a right to talk about it? Meanwhile, they shot a 12-year-old child in the chest in the same district.”

India will use the school bus incident to justify more arrests & more administrative detainments of stone pelters & other youth & to incite condemnation against them. We can fully solidify with the kids who were injured without joining the chorus associating political stone pelters with delinquents or trying to make stone pelting a criminal act as Israel has done. It is the way unarmed protesters defend themselves & deflect occupying armies using high-tech, sophisticated military equipment. To condemn them is to condemn Intifada.

This photo is the 12-year-old boy shot & killed today by Indian occupation forces. That is a crime against humanity. May he Rest In Peace.