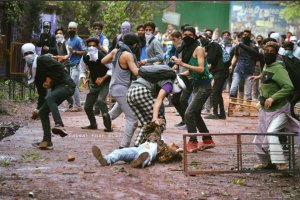 The Indian government issued an order today to indefinitely ban all social media in Kashmir (a total of 22 platforms) “in the interest of maintenance of public order”. The ban includes FB, Twitter, WhatsApp, YouTube, Skype. Internet services will also be suspended.

Indian officials have been mulling the ban for a while claiming it’s to avoid the spread of fake news that has led to violence & a volatile situation in Kashmir. Oblivious to how damn stupid it sounded, they claimed anti-national, anti-social, & subversive elements were misusing social media to incite hatred & violence against the Indian government & its 700,000 occupying troops.

The “fake news” that’s so inciteful is reports, photos, videos of the massive unarmed resistance to occupation being fired on by troops; using young men as human shields on military vehicles; goon squads of soldiers ganging up on protesters & beating them to a pulp; images of a young man just walking shot in the head.

Those images don’t engender hate or violence; they are creating political solidarity with Kashmiri self-determination. Kashmiri activists have used social media to overcome the international new blackout which forced them to stand alone for decades against one of the best armed & aggressive military forces in the world & the largest military occupation in the world (one Indian soldier to every 17 Kashmiris).

Most Kashmiris won’t be on social media for a while but they have taught us well so we cannot allow their voices to be silenced but must speak in their stead to overcome the news blackout Kashmiri activists worked so hard to challenge.

This photo is a student protester stopping to rescue another who has been injured by the occupying troops. Let the young man be a metaphor for solidarity during the period of the internet ban in Kashmir, however long it lasts. Whilst Kashmiris cannot speak for themselves & India increases its murderous crackdown on protesters, let us stop to rescue our not fallen but silenced sisters & brothers & to campaign against India to end the internet ban.