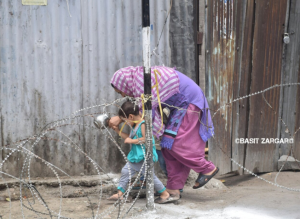 A woman in Srinagar is helping her small daughter get past a razor wire barrier set up by the occupying army to obstruct protests on the anniversary of the 2016 uprising that lasted from the execution of BW on July 8th through December. Not that the repression has scaled back but on the contrary, it has increased.

The most notable barbarity, almost the hallmark, of the repression during that uprising was the use of pellet munitions against unarmed protesters. Almost 1,100 pellet victims were admitted to Kashmiri hospitals; 523 of them were under the age of 20. Most suffered permanent health problems including infections because the pellets cannot be extracted from internal organs; hundreds suffered partial or permanent blindness; all suffered disfigurement & permanent scarring. It was so monstrous that international media actually had extensive reporting about the atrocities.

Altaf Ahmed of the Jammu & Kashmir Pellet Victims Association said most pellet victims have gone through several surgeries & require still more treatment, surgeries, & post-surgery care. But the expenses are beyond the means of most working families & the government of Kashmir has done nothing to provide assistance. Because many are blinded & disabled & likely suffering severe emotional trauma, they are unable to leave their homes unassisted, let alone go out to work. This is just exactly what the Indian army intended in order to bring resistance to occupation to its knees. It has not only failed to accomplish that criminal purpose but has broadened the international scope of opposition to occupation by its arrant barbarity exposed first & foremost by Kashmiri activists on social media.

End the occupation. Stop the use of pellet guns, other lethal weapons, razor wire barricades. Self-determination for Kashmir.