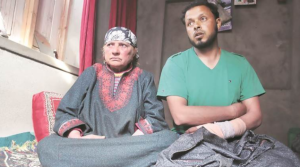 Indian media is reporting that the army officer who tied a young Kashmiri man named Farooq Ahmed Dar to a jeep as a human shield & paraded him through nine villages has received a commendation from the army for counter-insurgency operations.

Active solidarity with Kashmiris is imperative: End the occupation. Self-determination for Kashmir.

(Photo of Farooq & his mother by Shuaib Masoodi)