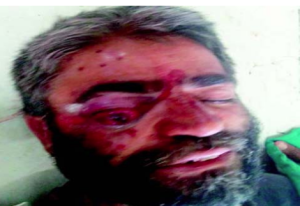 This is an extremely gruesome photo of 50-year-old Abdul Rasheed Wani, a shopkeeper in Sumbal, Kashmir who sustained severe damage to his eye & face when occupying forces used pellet guns & tear gas shells on unarmed students protesting the killing of eight militants & seven civilians in Srinagar & the Shopian districts earlier this month. India uses pellet munitions for the same reason Israeli snipers target the legs of youth in their murderous assaults on unarmed protesters: to inflict maximum harm without killing; to disfigure, disable, demoralize, & defeat political resistance to occupation.

The violence & savagery of modern war, occupation, genocide is extreme & unbridled by the volumes of international law attempting the impossible task of making violence against unarmed civilians humane. Activists need to begin thinking out & organizing structures of international collaboration to coordinate campaigns & mobilizations tying these struggles together to strengthen them. There are no humane weapons in war but several of them are intended to brutalize & torture without necessarily killing. Pellet guns, like the military use of rape, is one of those. Campaigning internationally against the use of pellet guns is critical to stop their use in Kashmir & to prevent other governments from taking them up. We should keep in mind they were also used against protesters in the Bahraini Arab Spring uprising of 2011.

Our sincere wishes that Abdul Rasheed Wani will recover from his injuries without permanent damage as so many others have sustained.