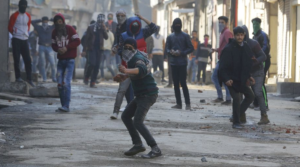 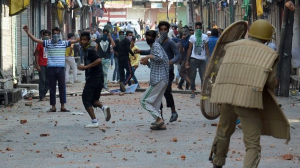 India Today did what they call a sting operation in Kashmir where they claim to have uncovered a criminal syndicate of “insidious villains” from Pakistan or possibly Kashmiri independence leader Syed Ali Geelani who are organizing & paying Kashmiri youth a stipend to charge Indian occupying forces with stones & molotov cocktails.

At first the report seemed to be Indian TV’s version of Saturday Night Live but it’s just too stupid for even lowbrow satire. Maybe a reporter from India Today did talk to four guys in Kashmir but they should chalk it up to being played & not make asses of their reporters by airing it as serious news. Either that or it’s the same trough that Assadist propagandists draw from.

According to one of the Kashmiri guys who played the reporters, they each get paid “Rs 5,000-Rs 7,000 (£80 / USD$100) a month & clothes. Sometimes shoes as well.” So for the price of a one-bedroom apartment in the outskirts of town, this criminal syndicate has found thousands of people to brave tear gas attacks, risk being blinded & permanently disabled with pellet guns, shot & killed with live ammunition, arrested, tortured, disappeared? It’s a good thing they throw in clothes & a pair of shoes.

India Today even made “Down With Stone Pelters” their banner on FB & Twitter today. What kind of crap is this that passes for political news & not just in Indian nationalist media? This obvious propaganda & foolishness was picked up by MSN & the Daily Mail. The problem in Kashmir is not stone-pelters. It is the presence of 700,000 occupying troops engaged in the most monstrous crimes against unarmed civilians. The purpose of this Down With Stone Pelters campaign is to justify even greater violence against Kashmiri Intifada under the guise of fighting mercenary terrorists.