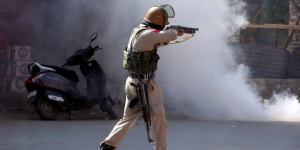 Just read a report in Indian media from May 2017 that India has purchased stink bombs (also known as skunk bombs) from Israel for use against protesters in Kashmir. Stink bombs, which smell like decomposing bodies & raw sewage, can be dispensed from water cannons. India already uses purple dye shot from water cannons against strikers in Kashmir to identify them with color; since the odor of stink bombs takes days to disperse from persons & things, it will be another way to identify protesters & to isolate them.

There are other later reports that say Indian “perfumers” & scientists have developed a distinct non-lethal stink bomb with an “unbearable” odor that will not affect the health & lives of protesters. Just like they promised about the pellet guns which have killed, disfigured, blinded thousands of protesters.

The CRPF, the Indian paramilitary force, says it has 60,000 personnel deployed in Kashmir out of the total Indian occupying force of 700,000. An Indian official said: “We have used chilli grenades, plastic shell tear smoke, stun grenades, colour-smoke grenades, rubber bullets, dye-marker grenades with skin irritant & multi-tier teargas launchers, but they did not yield the desired result. Let’s see how the stink bombs work out.” He forgot to mention pellet guns & live ammo also used against unarmed protesters. Or are they claiming such an extensive & lethal arsenal is necessary against stone pelters?

There are no reports from Kashmir that stink bombs shot from cartridges or water cannons have yet been put in use but Indian officials claim they have already been tested in India–& of course they will be used in India against protesters once their use has been practiced & perfected on the protesters of Kashmir.