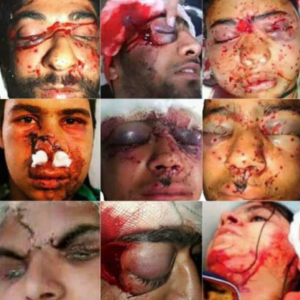 Kashmir Live News reports that 19 trucks of pellets ordered from India arrived at a distribution center in Kashmir & will be dispensed to police & CRPF (counterinsurgency troops) next week.

Reposting this collage for the umpteenth time because it shows the facial injuries & disfigurements caused by pellets. Pellet guns were also used against protesters in the Bahrain Arab Spring uprising of 2011. Even though they are called non-lethal, they are clearly intended to inflict maximum harm, including blindness, disfigurement, injury to internal organs, demoralization, & death. If we do not stand with Kashmiris & Bahrainis against the use of pellets, we will soon find them used against protesters in other countries–including our own.

(Photo collage of 2016 pellet victims from Freedom For Kashmir)