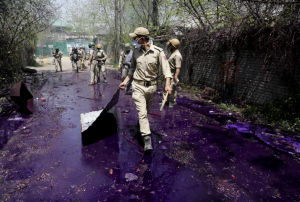 The caption to this photo in the Guardian-UK identified the location as “Srinagar, India.” Such a concession to Indian colonialism in a British newspaper isn’t surprising since when Britain ended colonial rule over India in 1947, its partition scheme maximized potential conflicts between regions, religions, ethnic groups & cultures.

Britain pulled the same malicious political stunts in Africa & the Middle East so that today the stinking legacy of British & European colonialism as a whole has not yet been decisively uprooted & defeated. Self-determination for Palestinians, Kashmiris, Rohingya, & so many others has not yet been realized because their freedom struggles challenge the political (dis)order engineered by colonialism to leave inequality & exploitation intact. Syria is every bit a part of that struggle.

This particular photo is of concern in a more specific way. Indian occupying forces shown here are standing in a flow of “purple rain,” a colored water shot from high-velocity water cannons which they used to disperse unarmed student protesters. The soldier in the foreground is dragging away a metal sheet used as a shield by student protesters.

High velocity water cannons are assaultive & extremely dangerous in several ways: by knocking people down, internal organs are damaged & bones broken, eye injuries & blindness, skin reactions & allergies, respiratory problems, panic, & death. They were first used to disperse protesters in 1930s Germany under Hitler. The US used them against the civil rights movement in the 1960s & England used them with dye added in Northern Ireland in the 1970s.

England was the first to experiment with adding dyes to water cannons but it was made notorious by the apartheid regime in South Africa. At the now-named Purple Rain Protest in Cape Town in 1989, police turned purple water cannons on thousands of peaceful protesters who stood their ground politically by getting on their knees rather than back down against the assault. One of the protesters leapt on to the water cannon vehicle, seized the nozzle, turned it away from protesters, & sprayed the facades of nearby buildings. After that, purple rain became a symbol of protest against apartheid & graffiti proclaiming “The Purple Shall Govern” appeared everywhere.

Many repressive regimes use high-velocity water cannons against protesters, including in subzero temperatures. Many add the colored dyes; Indonesia once added ammonia (in 1996); Turkey added liquid tear gas (in 2013); Israel routinely adds Skunk additive which one journalist said smells like “you mixed dirty diapers with with not-so-fresh road kill & left them all in the sun for a few days.” Like skunk spray, it is an ordeal to eliminate the odor from those hit with the spray.

It’s alarming that Indian military forces are expanding the use of purple rain from unarmed striking workers to unarmed protesting students. Water cannons cause serious injuries & deaths & that is exactly why the Indian military is employing them. This must be denounced & actively opposed as vigorously as their use of pellet munitions, tear gas grenades, live ammo, & human shields.