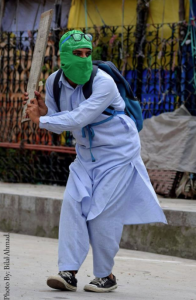 A masked Kashmiri protester prepares to hit a stone thrown at him by Indian forces in an assault after Friday prayers inside the compound of Jamia Masjid mosque in Srinagar. The Indian army is harassing worshippers & obstructing access to the mosque just as Israel does Al-Aqsa mosque in East Jerusalem.

The struggle in Kashmir has not shifted to religious extremism as media claims but Kashmiri right to worship without harassment & violence is under attack by the occupying army.