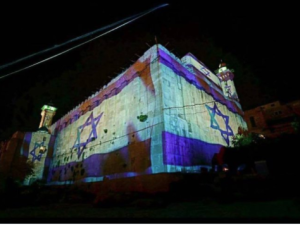 There is increasing aggression by Israeli settlers at Muslim holy sites, not just at the Al-Aqsa Mosque compound in East Jerusalem. One of the other most violated religious sites is the Ibrahimi Mosque in Hebron which is the tomb of Abraham/Ibrahim in both Muslim & Jewish traditions. It’s a very volatile religious site since this where Baruch Goldstein, an Israeli settler from Brooklyn, NY, shot to death 29 Palestinian worshippers & injured 125 others in 1994. The Zionists aren’t trying to reclaim ancient holy sites from 3,000 years ago but are trying to destroy Muslim holy sites as part of the ethnic cleansing of Palestinians from their ancestral homeland. The settlers have no more claim to Ibrahimi Mosque than Irish-Americans do to the Rhineland where their ancient ancestors worshipped trees 3,000 years ago.

During the Jewish festival of Purim in 2016, Zionist settlers converged on Hebron & used loudspeakers at the Mosque to sing racist songs calling for the expulsion of Palestinians from Hebron, This is when Israeli soldiers encountered 21-year-old Palestinian Ramzi Qasrawi & his friend 21-year-old Abd Elfatah Ashareef. They shot & killed Ramzi & wounded Abd. Whilst Abd was lying motionless on the ground, Israeli soldier Elor Azaria walked up & shot him in the head. An Israeli military court let Azaria walk for extrajudicial execution with a sentence of 18 months for manslaughter. He was sentenced in February 2017 & let out on house arrest in July. During the Purim festival this year, Zionist settlers & right-wing provocateurs from Israel converged on Hebron to booze it up & intimidate Palestinians. The reveler-provocateurs were fully protected by a beefed up deployment of Israeli soldiers.

In September of this year, 3,000 emboldened Israeli settlers stormed the mosque & engaged in provocations like this photo where they projected the Israeli flag onto the facade of the Ibrahimi Mosque & prevented Palestinians from performing their obligatory prayers. Now, the Palestinian Information Centre reports that nearly 45,000 Israeli settlers stormed the mosque on Monday & Tuesday of this week. Israel imposed a curfew on Palestinian residents & closed off roads leading to the mosque so the busloads of provocateurs could move freely. There are 250,000 Palestinian residents in Hebron & less than 1,000 Israeli settlers so they are being bussed in by the thousands for the same reasons they are invading Al-Aqsa Mosque & it isn’t to worship Yahweh.

The most powerful way to support Palestinians against ethnic cleansing & the denial of religious freedom is to honor & promote the economic & cultural boycott of Israel. Buy nothing with barcode beginning 729 & check every label on every product you buy. Stand with the Palestinians who have fought fearlessly, despite being vilified as terrorists, for nearly 70 years.

(Photo from Students for Justice in Palestine, Kent State)