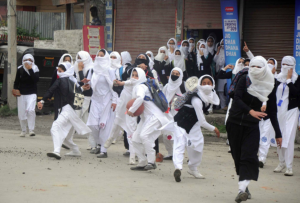 Stones are not the weapons of terrorists. Terrorists use assault rifles, drones, missiles, & explosives sold to them by Russian, European, Chinese, Israeli, & US weapons companies in a $400 billion a year industry. Terrorists use the same weapons from the same companies as the armies waging wars.

Stones are the weapons of the oppressed, of the unarmed, of the defenseless against those armed with assault rifles, pellet guns, tear gas canisters, missiles, explosives. What should the stone pelters do instead? Let themselves be shot at, blinded, disabled, killed without defending themselves? Go home & stop opposing occupation? Accept colonialism?

Social media is a political weapon, even more powerful than stones. But India is shutting that down. That won’t make stone throwing go away; it won’t make soldiers safer. But of course the Indian government doesn’t care about its soldiers any more than the US cares about its soldiers. They’re all just cannon fodder for corporate interests.

There is a way to stop stone pelting: the immediate, unconditional withdrawal of 700,000 Indian soldiers before those legions of stone pelters drive them out of the valley. Not unlike how the Vietnamese drove the US military out of Vietnam 42 years ago this month.