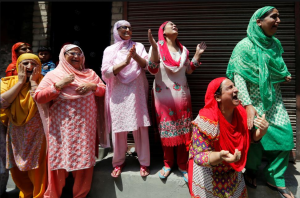 In a departure from its usual dead silence about the occupation & current siege in Kashmir, Reuters published this photo of Kashmiri women grieving as they watch the body of 23-year-old Riyaz Ahmad Shah being carried to his funeral in Srinagar.

The young man was an ATM security guard riding his bike back home after coming off duty Tuesday night. A postmortem showed he had more than 300 pellets inside his abdomen fired from close range by Indian soldiers. His brother Zahoor Ahmad explained that there were no protests or stone pelting in the area at the time of his murder so it was a cold-blooded execution.

Most of that of course is not explained in the photo caption since media has found in Palestine & in Kashmir that brevity is the very soul of deceit.