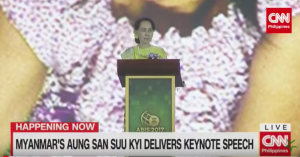 That human rights, genocide, death squads, martial law, occupation, carpet bombing of civilians did not come up at the ASEAN summit is no surprise. Coordinating sweatshop economics & militarization in the region are ASEAN’s primary concerns. Despite the Rohingya genocide, Suu Kyi was asked to give the keynote address on the subject of women’s empowerment & human capital development. Isn’t it significant, not to mention absolutely vile, how they use women’s rights to justify Islamophobia, war, occupation, genocide? The sarcasm of Suu Kyi giving a speech on women entrepreneurs is that the Burmese economy is controlled top to bottom by the military junta. If you aren’t a general or a minion or relative of the generals you won’t be negotiating contracts with foreign investors in Burma. Buddhist or not, you’ll be working sweatshops or hauling ass in the mines or oil fields. More importantly, if you are a Rohingya woman, you will be subject to mass rape, murder, & genocide by the military junta. Nevertheless, Suu Kyi’s speech, so chock-full of banalities, was received with frequent applause & even laughter at her lame wit.

To make sure there were no unseemly outbursts of human rights sentiments at the official ASEAN proceedings, UN Secretary General Antonio Guterres, Trudeau from Canada, Turnbull from Australia, & Tillerson from the US all held side meetings with Aung San Suu Kyi about the Rohingya genocide. Given that not one of them has taken decisive action to impose economic or military sanctions on Burma or to provide humanitarian aid to Rohingya refugees, we can be assured she received more cooing than reproach. She just serves too important a role in the neoliberal gold rush in Burma to piss her off.