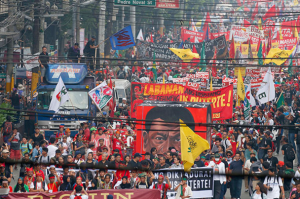 For the past month, hundreds of thousands of protesters have taken to the streets in Manila against Duterte’s death squad war on the poor under the guise of fighting drugs & in opposition to martial law in Mindanao province–where he claims he is fighting Islamist terrorists & where US troops are involved. Since Duterte took office last June 30th, at least 12,500 people, including teens & adolescents, have been gunned down on the street by police & vigilante death squads. Protesters have been burning effigies of Duterte & expressing respect for his victims by displaying the photos of those executed & hanging tarps with their images.

We stand in fullest solidarity with the protesters & express deepest respect for their courage in standing against Duterte the butcher.