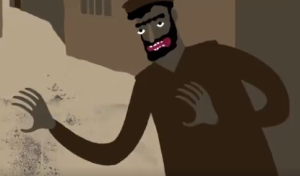 Human Rights Watch (HRW) has never condemned the US-NATO war in Afghanistan even after 16 years of bombing thousands of civilians & villages, mosques, farmlands, schools, hospitals; not after the country has become a field of land mines; not after the torture prisons, unspeakable human rights crimes, increasing child labor, thousands of children orphaned, growing drug addiction, & millions of war refugees. HRW doesn’t object to any of that. It just wants the US & European militaries to bomb, blow up, & torture people in a humane way, according to international law.

Now, as Afghans enter the 17th year of such atrocities, HRW has put out this vile video which is racist & misogynist against Afghans up to its eyeballs. It isn’t just the vile caricatures but that HRW takes the Islamophobic war mongering used to justify the war in October 2001 & turns it against the Afghan people: US-NATO had to liberate Afghan women so they could go to school & get their nails done. HRW doesn’t mention that the sole accomplishment is a nail salon in downtown Kabul. So now when Afghan women get shot down or bombed, at least their nails will be done.

Shame on HRW. US-NATO out of Afghanistan.

This repulsive & racist depiction of a Taliban is a screen shot from the video. You don’t have to hold the Taliban in any respect to object to the arrant racism of this caricature.