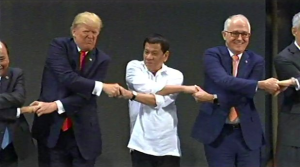 Trump, Duterte, & Malcolm Turnbull from Australia doing a bonding ritual at the ASEAN summit in Manila: clearly they did not allow the Rohingya genocide, Duterte’s death squad war against the urban poor & martial law & bombing war against Muslims, Turnbull’s torturous imprisonment of refugees, or the many wars the US & Australia are engaged in to interfere with sweatshop economic cooperation or the military buildup in the South Asia region.

The Mueller investigation is focused on Trump & his minion’s financial dealings with Russia but the Trump family has real estate dealings all over the world including in India & the Philippines which have not been investigated for conflict of interest. For several years, even before Duterte’s regime, the Philippine’s ruling elite, in accordance with IMF-World Bank neoliberal economic policies, have been forcibly evicting & torching Manila slums to make room for development of resorts, upscale malls, free trade zones. This is an investigation I did last January on Trump Towers in Manila which is directly tied to Duterte’s death squad war on the poor; Trump & Duterte could be impeached & prosecuted on these grounds alone: https://www.maryscullyreports.com/2017/01/29/