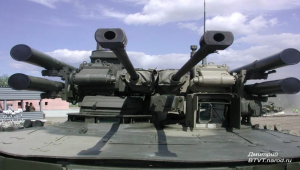 The libertarian outpouring of solidarity with Putin & the Kremlin is so touching but don’t they think the Russkis can take care of themselves? Usually solidarity goes to the oppressed–not to the guys with the bombers, warships, missiles, tanks, & this thing called the Terminator which Russia is deploying in Syria against unarmed civilians.