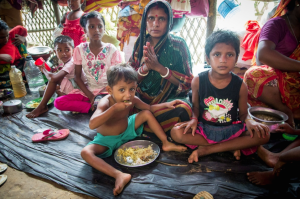 Onu Bala, a Hindu refugee in Bangladesh spoke about the masked vigilantes dressed in black who torch villages & murder unarmed people in Arakan state who Burmese officials claim are Rohingya death squads against Hindus. She said:

“I don’t know who they were; the only thing I could see were their eyes … It didn’t matter if we were Hindu or Muslim … they were burning down everything.”

Another Hindu refugee said Rohingya farmers & Hindu laborers lived side by side in harmony for years until the genocidal onslaught by the Burmese army & nationalist death squads that began August 25th.

Photo is Onu Bala with her three kids who all fled when the masked vigilantes invaded their village & began torching.