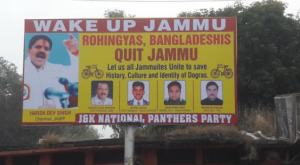 Mohammed Imran, a Rohingya friend, has been urging me for a while to write about the persecution faced by Rohingya refugees in Jammu. India considers Jammu & Kashmir to be a state of India.

Kashmir Valley, occupied by 700,000 Indian soldiers, is Muslim in its majority; the Jammu district is two-thirds Hindu. In themselves, religious differences are not an issue between Rohingya Muslims & Jammu Hindus but rightwing Hindu nationalism in Jammu is a problem as it is in Kashmir & in India.

According to the UN refugee agency (UNHCR), there are 14,300 Rohingya refugees registered with them in India, 7,000 of those living in refugee camps in Jammu. There are thousands of unregistered Rohingya in India & Jammu, which means they are ineligible for UN humanitarian aid. According to one source, there are about 13,000 Rohingya living in refugee camps & makeshift shelters on the outskirts of Jammu.

There is growing terror among Rohingya refugees & Bangladeshi immigrants living in Jammu because of a crescendoing xenophobic hysteria demanding they leave or be deported. The campaign which began last year is orchestrated by the BJP, India’s ruling Hindu nationalist party, & the Jammu & Kashmir National Panthers Party (JKNPP), a local rightwing nationalist group.

The hysteria is moving beyond rhetoric into calls for pogroms against Rohingya with a systematic & threatening xenophobic campaign of billboards like this sponsored by the JKNPP saying: “Wake up, Jammu, Rohingya, Bangladeshis quit Jammu. Let us all Jammuites unite to save history, culture & identity of Dogras.” In April, a prominent official in the Jammu Chamber of Commerce called for Rohingya to be “identified & killed.”

This is an entirely racist, nationalist, & xenophobic campaign since Mehbooba Mufti, Jammu & Kashmir’s chief minister for India, reported a lilliputian crime rate among Rohingya of 17 criminal cases against 38 Rohingya for various offenses, including illegal border crossing. She also reported that military surveillance found no evidence of “radicalization” among Rohingya refugees.

Since the Indian army is surveilling the Rohingya community & finds them to be exemplary in politics & conduct, it should be possible for the army, which has thousands of troops garrisoned in the Jammu district, to extend protection to them against the rightwing nationalists threatening violence.

Full refugee rights to Rohingya in Jammu, in India, & elsewhere. Asylum from genocide is mandated in international law & by every precept of human civilization.

(Photo is billboard put up all over Jammu by the JKNPP)