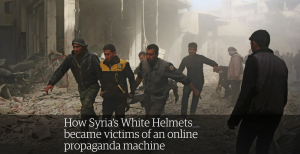 There needs to be a political analysis of why so many progressives have become ardent supporters of the Assad dictatorship. It represents a tsunamic shift in politics devastating the international antiwar movement at a time when it is more critical than ever. Partly it is the influence of people like Tariq Ali & John Pilger & as this article points out with Russian & Syrian trolling with their stable of paid propagandists like Eva Bartlett & Vanessa Beeley. But there is also the syphilitic influence of Islamophobia & anti-Semitism that must be accounted for.

This article is an excellent introduction to that necessary analysis. One would hope it is not too late for most who were confused to come to a real understanding of the Syrian revolution & counter-revolution. Surely the fact that Bartlett, Beeley, & other prominent Assadists have open associations with European fascists & that they endorse or deny the Rohingya genocide will lead those of good will to reassess their understanding of what is going on in Syria.

This article is so important because Bartlett & Beeley Ltd have made the White Helmet rescue workers the primary target of their propagandistic lies as part of denying Russian & Syrian bombing of civilians, including with gas & barrel bombs. They never address US military intervention because it would show that Russia, Iran, Saudi Arabia, Israel, the US-coalition & all the other military players are partners to the Syrian counter-revolution led by Bashar Al-Assad.