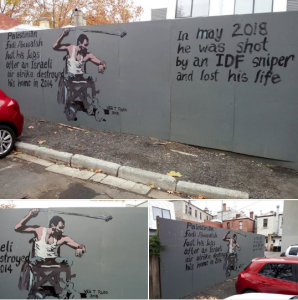 Graffiti tribute in Melbourne, Australia to 30-year-old Fadi Hassan Abu Salah, a double leg amputee & one of 64 killed by Israeli snipers at the May 14th Trump embassy massacre. The artist Van T. Rudd said “This mural has already been erased! A friend went to Kensington to show his children this mural yesterday & found that it had already been painted over. So, it existed for about three days. To whoever censored it: You can erase the image, but you can’t erase the spirit of resistance.”