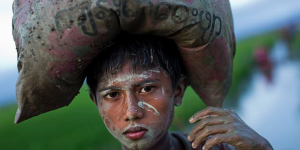 The UNHCR estimated today that 270,000 Rohingya refugees have sought asylum in Bangladesh just in the past 14 days. The truth of the matter is they have no idea of how many fled, how many managed to enter Bangladesh, how many drowned or were killed trying, how many were turned back by Bangladeshi border guards, or how many stepped on landmines laid by the Burmese military on the border.

There’s no question that the number of Rohingya refugees in Bangladesh is taxing the resources of the government but their response has been to increase the human misery of Rohingya rather than provide safe asylum. Instead of demanding other countries provide safe passage & asylum to refugees, the Bangladeshi government obstructs refugees from registering with the UNHCR to receive humanitarian aid (dished out with a teaspoon), offered to conduct joint military operations in Arakan state against the possibly imaginary Rohingya insurgents, & are now resurrecting the plan to relocate thousands of refugees to the barren, isolated, uninhabitable island of Thengar Char.

This is a human rights catastrophe of epic proportions. Such barbarism as the junta is using against the Rohingya was the essence of colonialism & is the essence of neoliberal scorched earth economic policies. If we fail in rendering international solidarity, not just in word but in deed, the struggles against genocide in Arakan & against neoliberal barbarism around the world will be set back & the legacy of colonialism which haunts humanity will again reign over human relations.

Is this young boy a jihadi terrorist or is he a young boy trying to escape genocide? Stand with the Rohingya people against genocide & for human, democratic, civil, & refugee rights.