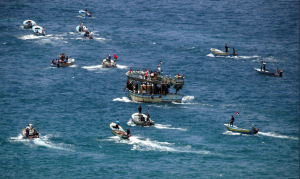 A flotilla of boats left the Gaza port this morning carrying student activists & wounded Palestinians for treatment, defying the 12-year Israeli blockade which prevents medical supplies from entering Gaza & patients from leaving for treatment. The Israeli navy is attempting to enforce the blockade. About an hour ago & nine miles out to sea, one activist on the flotilla told reporters: “We’re surrounded by Israeli warships to the left, the right, to our front & from behind. We’re stuck in the middle.” There were also reports of Israeli bombing on several sites along the Gaza Strip. It was reported just minutes ago at 12 miles out to sea that the Israeli navy has seized the freedom flotilla & passengers have been taken by Israeli forces. Essentially, the apartheid regime, which calls the flotilla “a cynical publicity stunt,” has stopped the sick & injured from escaping Gaza to get life-saving medical treatment elsewhere.