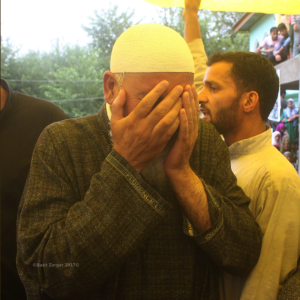 It’s not an exaggeration to say the most compelling photojournalism today is from Kashmiris. They are brilliant in conveying the brutalities of military occupation not by displaying the gruesome so much as by showing us resistance & the humanity of occupation. That is not so we can turn away from the gruesome realities that Kashmiris live with but because they can be more terrifying & discouraging than motivating to political solidarity. It is that we can more easily identify with Kashmiris as our own.

This grieving man attends the funeral prayers of Parvaiz Ahmad in Pahoo village, Pulwama district, south Kashmir. We needn’t see what the Indian army has done to young Ahmad; it is enough we see how Kashmiris feel about his loss.

May Parvaiz Ahmad Rest In Peace. Our sincere condolences to his family & friends.