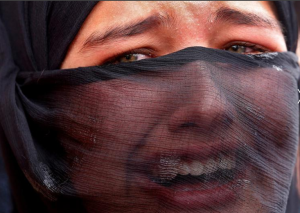 This young girl is one of thousands of mourners who attended the funeral today of Aaquib Gul, a militant killed along with two other young men in a hunt to kill operation by Indian soldiers in the Budgam District of Srinagar. Indian media reports that it turned into an all-night gun battle when the soldiers were fired on by the militants. Maybe they were fired on; more likely they weren’t. Military officials said “some weapons & ammunition were recovered from the spot.” Enough for three men to keep up an all-night battle with a cordon of troops or just a couple pistols?

Mourners at the funeral shouted freedom slogans & Indian paramilitary troops responded with tear gas. Where are the condemnations for such violence, including against funeral mourners? Do we hear the sound the silence?