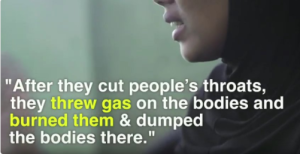 Fortify Rights, a human rights group, is calling for an international inquiry into Myanmar army “atrocities with impunity” against Rohingya Muslims which have not ceased since October 2016.

Aung San Suu Kyi, as State Counsellor, publicly ridicules accusations of sexual violence by the military as “fake rape.” A member of parliament in Arakan state publicly stated that no soldier would rape Rohingya women because they are “too dirty.”

The UN & human rights groups claim they cannot indict Suu Kyi & the Myanmar military for crimes against humanity because they are denied entrance to Arakan state to investigate. They weren’t allowed to tour the gulags of the USSR either but that didn’t stop them from condemnations because there was substantial testimony about monstrous crimes committed by the Soviet regimes. Do the testimony of over 70,000 refugees (just in the past 5 or 6 months) not count for documentation?

This is the brief video Fortify Rights are putting out as part of their call.