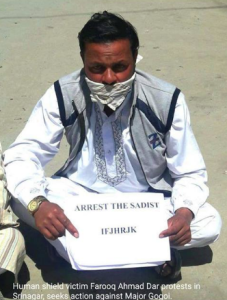 Farooq Ahmad Dar–the young man humiliated & endangered when Major Leetul Gogoi used him as a human shield on the front of a military jeep–is protesting in Kashmir to get justice still denied by India. We stand with him 100% in his fight against military impunity for human rights crimes they commit while deployed in Kashmir. No one understands this young man’s fury better than other Kashmiris or those in US war zones subject to the same impunity for war crimes.