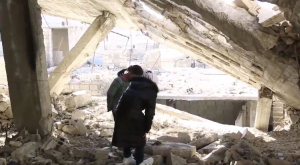 “Even birds die under the bombing”

Said by one of these little girls examining a bird killed in the several week bombing siege of Ghouta, Syria.

An estimated 400,000 civilians have been under siege by Syrian bombers for over four years in an attempt to break the revolution. Earlier this year, Russia, Syria, Iran, & Turkey designated Ghouta as one of the four de-escalation zones but Syria resumed bombing last month, including with cluster bombs. Bombers have targeted water supplies & medical facilities & prevent the delivery of humanitarian aid. This is causing mass starvation, malnutrition, & death from preventable diseases, especially among children. Amnesty International has called this Syrian policy “surrender or starve.”
According to one Amnesty official: “While the Syrian government’s stated aim has been to vanquish opposition fighters, its cynical use of ‘surrender or starve’ tactics has involved a devastating combination of sieges & bombardments. These have been part of a systematic, as well as widespread, attack on civilians that amounts to crimes against humanity.”

This is the full Amnesty report on Syria’s “surrender or starve” tactic to destroy the revolution against Assad’s dictatorship: file:///Users/user/Downloads/MDE2473092017ENGLISH.pdf

(Screen shot from video tweeted by Noor And Alaa‏ @Noor_and_Alaa)