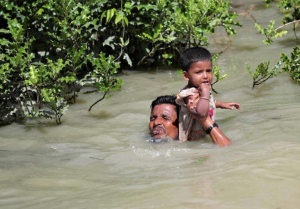 The European Union is trying to pull off a dog & pony show with a resolution blocking cooperation with the Burmese military when such a resolution has already been in force for several years. It’s to make the EU look like it’s doing something about the Rohingya genocide without endangering the billions that EU member nations have invested in Burma.

Now the World Bank is trying to pull off its own stunt. It just announced it would withhold a $200 million loan to Burma. But that loan, which is chump change to the World Bank, is only one of 13 projects in Burma funded by the World Bank. They said the bank would continue to fund “high-impact projects that support education, health services, electricity, rural roads & inclusion of all ethnic groups & religions, particularly in Rakhine state.” It’s not that the genocide went right over their heads but that they will not allow it to stand in the way of making billions. That’s how sick capitalism is in its barbaric phase.

Photo is Rohingya refugee with his child trying to swim the Naf river to Bangladesh–either because he cannot afford to pay the boaters ferrying refugees across or because Bangladeshi border guards have destroyed the boats. This is what the EU & World Bank are choosing to play stupid about.