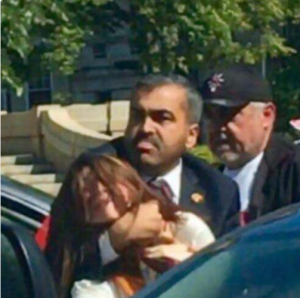 Erdogan apparently forgot he wasn’t in Turkey because after his visit with Trump his bodyguards attacked a small group of protesters across the street from the home of a Turkish ambassador in Washington, DC where he was staying.

The human rights activists were protesting Erdogan’s policies in Turkey & Syria & his treatment of the Kurds. The DC police were present but the goon squad broke through their line, charged across the street, & began punching & kicking protesters as if they were in Istanbul.

A video shows the goon squad resisting police to get at the protesters. Under DC law, that is at least a misdemeanor. They also sent nine people to the hospital with injuries which may entail felonious assault charges. The two thugs arrested were later released for diplomatic immunity. Media reports showed Erdogan watching the attacks from the ambassador’s home.

Photo is Erdogan bodyguard choking a woman protester. One hopes there is a provision in US law allowing those assaulted & injured to sue the Turkish government for all it’s worth. We have a Bill of Rights here which has not yet been overthrown.